The birth of a song. From Juliano, our friend in Brazil. Lisbon, October 2009.

“It’s time to wake up!” (with Sebatian Mekas, Jonas Mekas, André Santos, Isabel Salvado, and some other great friends in Lisbon from juliano on Vimeo.

A conversation between Leonidas Donskis and myself (in Lithuanian) on the Vilnius TV program “Be Pykčio,” November 5, 2007.

In response to the question in the post below: “Jonas, What do you think of this nostalgia for the film projector, you the man with a digital video camera?”

Sharits’ Shutter Interface installation at Gallery Naftali had nothing to do with nostalgia: It was all real, here and now. The piece, as far as I know, was never done anywhere before. So this was a premiere. Now, today. Nostalgia has to do with past memories. But this event took place here and now, had no past. Nostalgia will come twenty years from now… if it ever comes…

(The inauguration of Jonas Mekas Crosswinds Street in Užupis, Vilnius)

For the release of the book My First New York, I read at Barnes and Noble from my diaries:

I will be reading today at 7:30pm at Barnes & Noble on 67th St. and Broadway, together with some other contributors to the Harper Collins book My First New York.

Here is a machine translation of some thoughts of a friend in Hokkaidō, in reference to a post I made a few days ago: 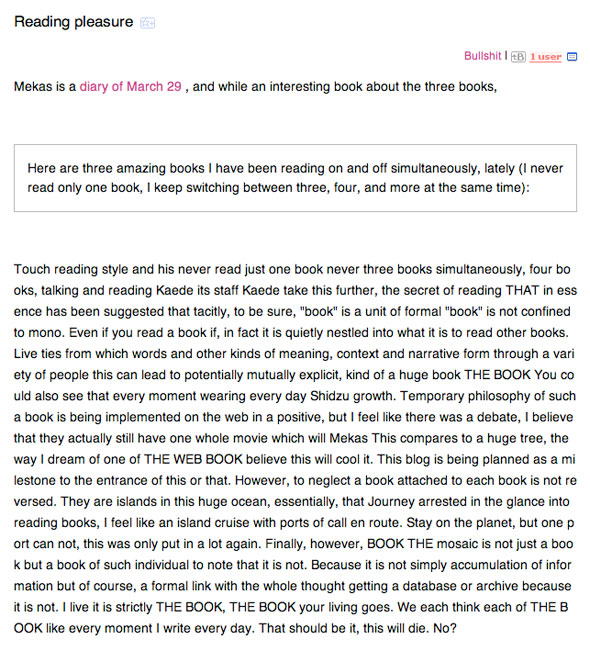 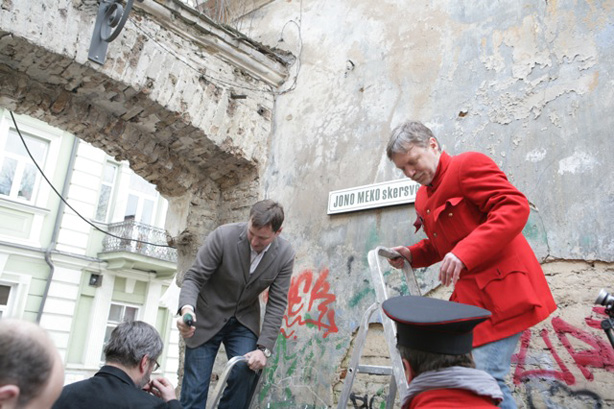